Fry’s Cave in Kiama or the fear of the unknown 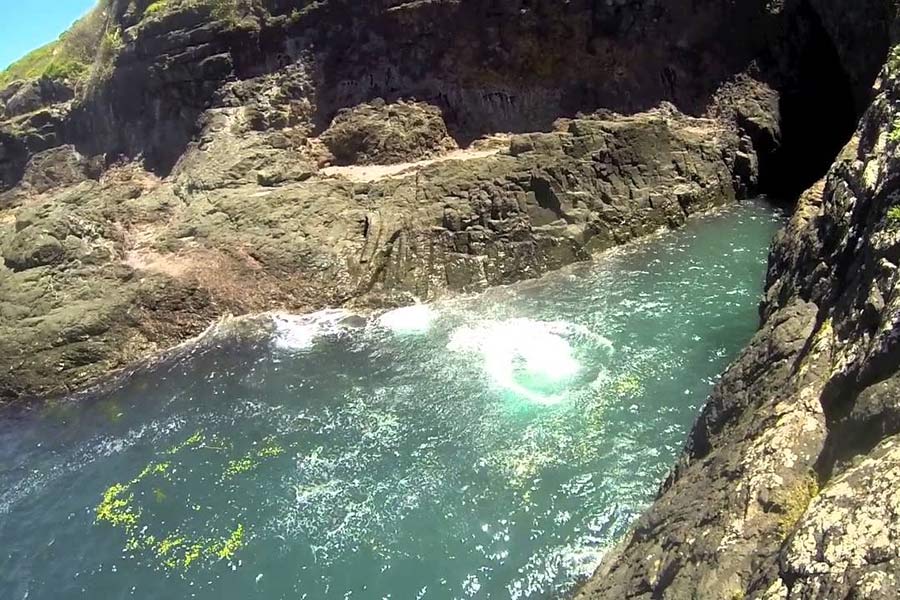 I don’t remember the exact day but it was about 2 years ago when we stayed with friends in their house in Kiama. One Saturday my boyfriend and I went for a morning walk down to the headland when he had the sudden idea to jump into Fry’s Cave. Ever the adventurous soul I started to get excited, not knowing what to expect. We ran down through the grass and climbed over rocks and when we finally stopped I looked down and I started to feel dizzy. By the looks of my boyfriend I know that I must have transformed into a ghost within seconds. He laughed and climbed even higher up. “We’ll jump together, ok?” I swallowed and stuttered: “Ok.” What I meant was: ARE YOU OUT OF YOUR MIND? I WILL DIE HERE TODAY. THIS IS THE END!

Just do it – or maybe not

He smiled at me and started counting down from three but all I could do was stare down into the cave where angry waves seemed to get pushed around violently. “You’ll have to jump out. Don’t just step down or you will hit a rock, ok?” I could hardly hear his voice through the noise of all the blood rushing through my head. I had to stop looking down and focus but I was paralyzed by fear. The fear of the unknown. But mainly the fear of splitting my head open on one of the many rocks I couldn’t see from up here. What if I was unlucky, jumped on top of one and got paralyzed. What was the name of that book again where this happens to that guy? My mind was racing by now and all the pep talk of my boyfriend didn’t convince me to jump while he leaped off with ease like it was a walk in the park.

Argh. Why am I such a coward!!? We spent hours (bless him for his patience) on the edge while I went through every humanly possible emotion switching between raw anger, loud self-encouragement and crippling fear every few minutes. In the end I had to admit to myself that I was too scared to jump off the edge into the water, the unknown. I couldn’t do it. As we walked back in silence I felt relieved but I was also disappointed in myself for chickening out. Most of all I was exhausted like I just ran a marathon (not that I ever did that, but you know what I mean) and it took me a few hours to shake off that sombre feeling.

It’s ok to be scared

I was reminded on that day that it’s alright to be frightened sometimes. To admit to myself that even though I’m able to be brave and jump in some situations, it’s also fine to be afraid when facing other obstacles. Every now and then I have to remind myself of not being too hard on myself if my fear takes the upper hand. After all, it’s a protecting mechanism designed to ensure our survival as a race. I am not saying you shouldn’t push yourself out of your comfort zone once in a while and risk the jump into the unknown, but that it’s also ok to say NO THANKS sometimes.

As far as Fry’s Cave (or Fryer’s Cave/Friar’s Cave as it’s sometimes referred to) is concerned, do check it out if you are in the Kiama area. The cave is named after Irishman Robert Baker Fry who unfortunately disappeared near the sea cave in 1871. It is said that he washed from the rocks and subsequently drowned so be careful when checking it out. Who knows, I might even go back one day and have another attempt at it. Never say never.

A Weekend Away to Relax and Re-Energise
Scroll to top