It’s been a couple of weeks now since we boarded a bus in San Juan del Sur in Nicaragua – well actually we first jumped in a transfer car, then lugged all of our stuff, that by now is almost impossible to carry, over the Costa Rican border and climbed on a bus that after about four hours let us out in the middle of nowhere at a crossroads just when it started to rain heavily (think monsoon).

Fortunately, we found a taxi (or better it found us) and got a lift to the ferry, where we – by accident – found a bus that would take us to our final destination in Costa Rica: Santa Teresa. What a mission. But that’s another story :)

San Juan del Sur – such a special place for us

I had mixed feelings when leaving San Juan. It’s such a special place for me / us. It’s the place where Lac and I met about four years ago. It’s also the place where we tied the knot. 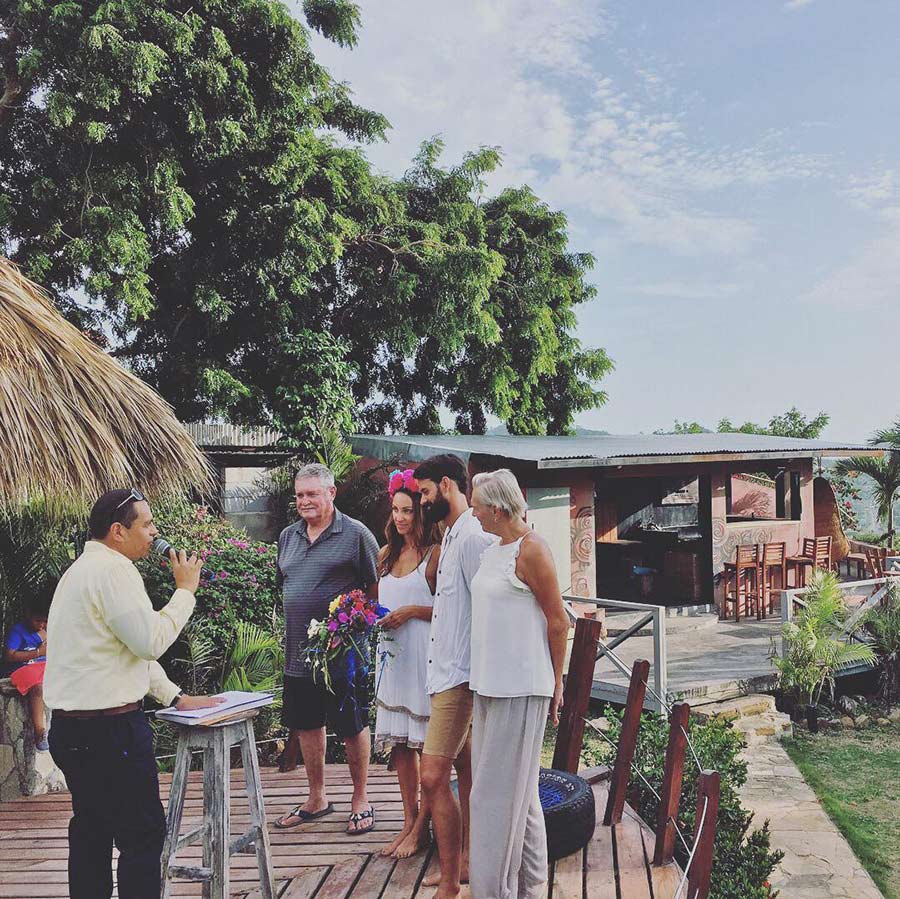 Getting married at the place we met almost four years ago

The wedding setup was such a beautiful surprise for us as we hadn’t planned any wedding at all. It all came together almost magically after visiting Carla & Fred at their hostel the week we arrived in Nicaragua.

After some drinks a few ideas got thrown around and there we had it. We would get married at Casa de Olas, the very spot we first laid eyes on each other. The affair turned out to be perfect. Next to Carla & Fred, their two staff members Lauren & Christian and the two only guests Sjoerd & Labhaoise a few families of their Nicaraguan workers witnessed us getting married at the edge of the infinity pool overlooking the bay of San Juan.

A relaxed wedding at the place we met

A few minutes after saying si to each other we jumped in the pool to cool off and then we couldn’t wait to dig into the roast Fred had prepared. Relaxed and happy vibes all around. Labhaoise grabbing the microphone and entertaining us like a professional wedding singer was just the icing on the cake. How did all of this happen?

Post-wedding dive in the pool

The wedding marked our last weekend in San Juan. By that time we’ve already spent almost three weeks in Nicaragua enjoying sun & surf to the fullest. The only dark cloud hanging over us was the rising civil unrest in the country due to anti-government protests resulting in violence throughout the country.

The city shut down bit by bit

San Juan is a little bit of a bubble and we didn’t witness any violence but still, the city was shutting down bit by bit. Every day another shop closed their doors, then an entire beach and when the city ran out of gasoline we knew that things might not get resolved as quick as we thought.

We left after our wedding weekend, just as we had planned initially, but we felt for the people of San Juan and all the Nicaraguans who were fighting for their rights having to deal with violence, roadblocks and food/gas/water shortages.

Although, unfortunately, this happens all around the world in different countries it hit us hard witnessing political unrest first hand happen to the very people that gave us a warm welcome every time we visited their country. Being safe and leading a peaceful life is such a privilege and we don’t appreciate it enough.

This being said, lots of love is going out to Nicaragua with various initiatives started to help the people. If anyone wants to contribute, here’s a link: https://www.gofundme.com/pa5b5r-stand-by-nicaragua

Getting Things Done Is Addictive
Scroll to top