A couple of weeks ago I went on my very first retreat. Writing, meditation, yoga, it sounded very promising. All in the magical surroundings of Malaga in Southern Spain. A proper adventure not knowing what or who to expect on the other side.

I met the three other participants at the airport, where we were picked up and driven through the charming landscape until we arrived in a town called Coín and pulled up in front of a wide gate. Bags in hand, Suzie, Georgie, Ad and I said goodbye to our taxi driver and were greeted by Robbie, our yoga teacher who showed us our accommodation.

Stepping into a magical world

It was like stepping into a different world. Green wherever you looked, trees, grass, the sound of a river and a few wooden cabins, a bell tent and a dome (my shelter for the week) dotted in between. Plants in beautiful pots, Buddha statues, wind chimes and a spectacular pool area awaited us. I think we all looked at each other and thought Not bad, not bad at all!

After meeting our lovely hosts Samm and Mike and their daughter Alba as well as their animals (a cat named Yoko & a dog named Magic) we were introduced to our daily routines for the following days. We would be woken up at 8am to write three full pages in our journals before gathering for our yoga practice, which lasted until around 10am. Then it would be breakfast time followed by a three-hour practice of walking and sitting meditation as well as writing practice including reading out loud. Gasp! 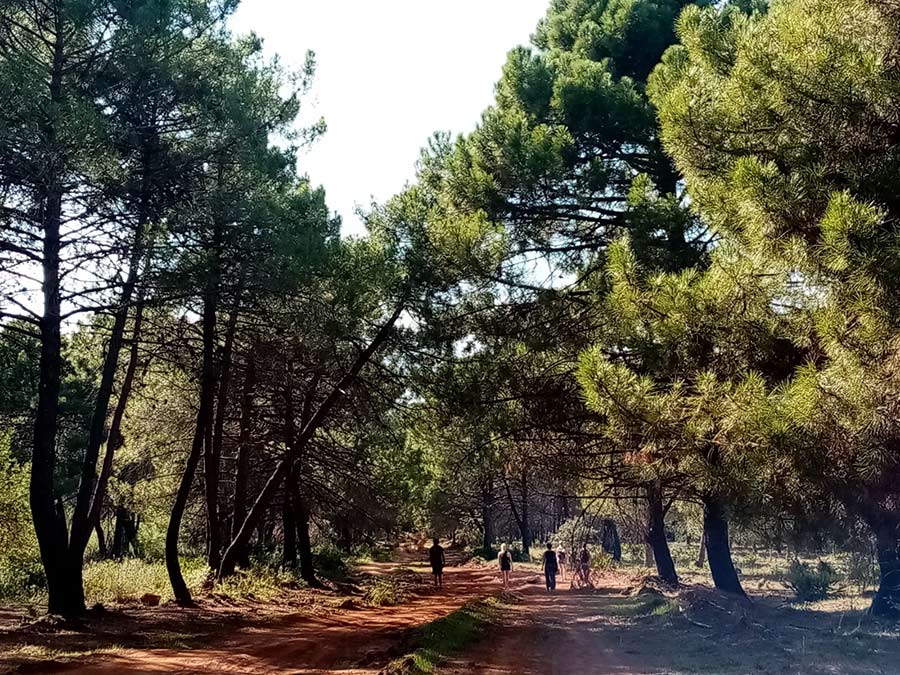 A walk through the forest – photo credits Riverheart Retreats

Most of the day we’d spend in silence

Lunchtime afterwards, followed by some free time and at 4pm we would gather to have some tea and snacks and the silence, that’s right the SILENCE, would be lifted. Everything until this moment would be done in silence and the reading aloud part would be the only time to be able to hear our own voice (except for the shy om’s and shanti’s chanted at yoga)

We’d have two hours of creative writing, mixed with field trips every other day to write in the forest and an antiques shop, and then some free time before dinner around 8pm. We’d always sit around the table and really enjoy dinners, as they were the only meals where we could speak to each other and talk about the day. We’d all retreat to our little nests around 10pm to get some shut-eye, because by that time we would be exhausted.

All distractions gone, no excuses

Even writing this down I feel the intensity of it. The silence was weird in the beginning, especially during our first silent breakfast when I spilled a spoonful of porridge onto the clean cutlery and couldn’t say anything. I caught Suzie’s eye and had to fight back an embarrassed giggle and so did she. Later in the week it seemed easier and sometimes almost like a relief to not have to fill the silence with forced chitchat. 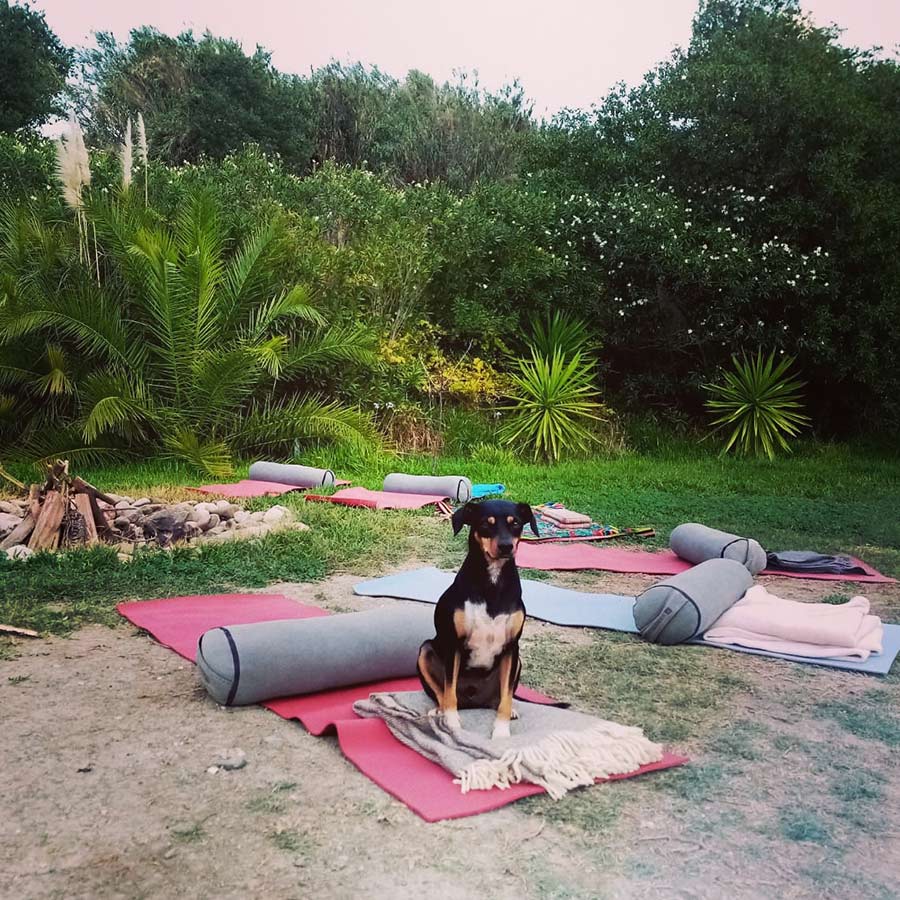 By the end of the retreat everyone seemed quite comfortable with not speaking and taking this time just for themselves to read, write or just look at the sky. Suddenly everything became a topic to write about. I’d have the time to really follow my thoughts instead of drowning them with any type of distraction as soon as they arose. I thought I got a glimpse into what would be the headspace of brilliant writers and artists. Just for this week I too was somewhere otherworldly. A vacation from normal everyday life, a trip into the depths of possibility.

The right headspace to create

I could go on and on about this incredible experience but let’s face it, you’re not interested in reading several pages of my rambling. But what I will say is that I learned this: a combination of meditation and writing is gold. I also came back with lots and lots of practical tips when it comes to writing, meditation and yoga. Having spent time with people I felt a true connection with I returned with a newfound thirst to create.

We finished our week with a fire ceremony, which would take too much time to explain here, but let’s just say we went on a crazy journey inwards to discover our totem animal (I just realised that this probably brought up more questions than answers haha) and by reading some more of our writing to each other. 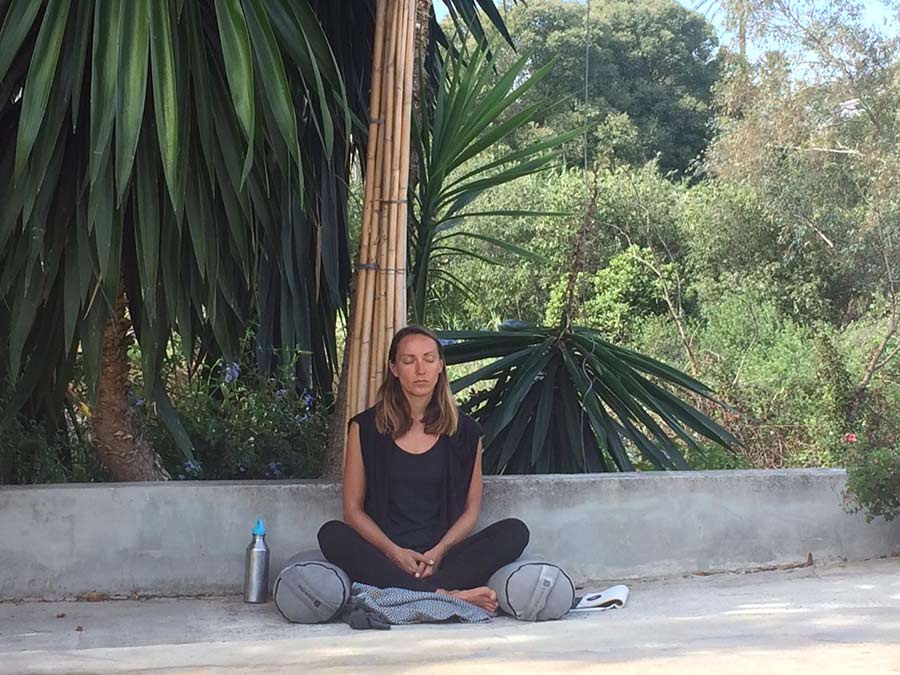 It was a beautiful ending to a beautiful week, and I’d urge everyone who has the chance to take a week off work to participate in a retreat around their passion. If anyone wants to get the details about this specific retreat, just send me a message and I’ll forward them to you.

No words to describe
How thankful I am, this time
Precious, all of you